10 useful things I learned when doing research for my next book.
1. Nesting pythons don’t eat. So, if you run across a nesting python, don’t fret. How will you know if it’s nesting? The eggs are the giveaway.
2. Lots of Ghanians are named after the day of the week. Adio is born on a Monday, Abena is born on a Tuesday, Akua is born on a Wednesday, etc. And, by the way, Kofi is born on a Friday, so now we know something more about the ex Secretary General of the United Nations don’t we?
3. Jerry Rawlings was 32 the first time he took over the leadership of Ghana. And I thought I was doing well having a career by 45.
4. Ghana has 9 government sponsored languages. Yes, you read that right: 9. Canada, get over yourself.
5. John Travolta was hot (that means cool) in 1979. But he was cool (that means hot) too.
6. The Sony walkman was released in June 1979. OMG I feel old.
7. YMCA sued the Village People for libel because of their song of the same name. Sid Vicious, a former member of the Sex Pistols, died due to a heroin overdose during the trial for murdering his girlfriend. What is the useful thing I learned? Entertainment was just as crazy then as it is now.
8. The Eagles, Pink Floyd and the Police were big. Need I say more?
9. In 1978 Argentina won the World Cup. Yep, important and useful information.
10. Margaret Thatcher was elected Prime Minister of Great Britain in1979. Okay, I should have known that, but hey, I was only 12 at the time. 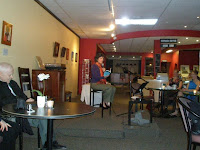 In the past two weeks I’ve launched Storm Tide twice, once with Jodi Ludgren, and once with 8 other Orca book writers. They were both fun, and what I learned about book launches is that they’re really an excuse to see all kinds of friends who you don’t normally get to see, but like at weddings, you don’t get a chance to spend much time with them. So thanks so much to all of you who came out to either of the launches, and I hope we get more time together soon.
What I loved most about both events was listening to other writers’ stories about how their books came about and their writing or illustrating process. I had no idea how labour intensive illustrating graphic novels is!
It was also really fun to talk about my own writing process, and to read from my book. My favourite moment: when my seven year old friend came up to me and said, “You made me want to read your book.” Yahoo.