I love living in a village. Have I said that before? It’s an addiction, actually. We’ve tried to move away, but it never happens, Cook Street Village has its hooks into us. Take today, for example. When I came home this evening, my son was waiting for me. He wanted to know if we could go into the village so he could get some food that he could cook for dinner. What mother in her right mind would say no to that? So we walked to the butcher and bought some meat, then down to the specialty food store for tomato sauce, then across the street to the baker for some bread. Sure, we could have gone to the grocery store and got it all there, but at the grocery store no one would have greeted us by name or given us samples to try, or asked how we liked the stuff we bought the other day.

My son and I agreed we’d watch a DVD tonight, so we crossed back across the street and ran into the video store. That took a long time, because we chatted with friends also looking for DVDs, then went to the till for a recommendation, then compared a couple of titles to see which we’d prefer.

It was later than we planned by the time we got home, but so what? It’s Friday night, we’ve got a good meal planned and a movie to watch. It’s all so commonplace and simple, I know, but it brings me joy.

I just finished reading a fantastic book called Saving Francesca by Melina Marchetta. I loved this book, and it got me thinking about what makes a book at YA book. Is it that the character is young? That can’t be, because there are lots of examples of books with young protagonists. Is it that the themes are related to young people? But the themes in this book are dealing with loss, grief, love, finding oneself… all the things any great book is about. So what is it then that makes this a YA book? Or is that category not real? Maybe there are no barriers between what youth and adults read. After all, I’m not a young woman, and I read books lablled YA.

I went to an Usher concert the other day. Let me set the stage for you. Vancouver and it’s pouring rain and my son, our friend and I and, oh about 20 thousand other people stream onto Rogers stadium. We all find our seats ( yes we were sitting apart-who wants embarrassing old mum sitting next to them after all) and the concert started. At first two men and a turntable came on and I thought did we come all the way to Vancouver for this? But then Akon came on and the crowd exploded and all was good. Favourite moments? When Akon put on a Canucks jersey and the crowd exploded. When Usher rode a platform across the arena in a space man’s suit and watching my boys have the time of their lives. Worse moment? When Usher dripped sweat all over the girl he brought up on stage. Is Usher sweat worth more than most people’s. She seemed to think so, but oh yuck. 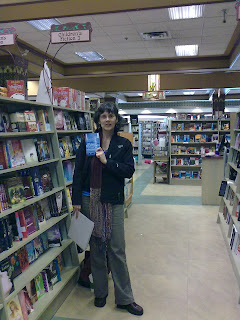 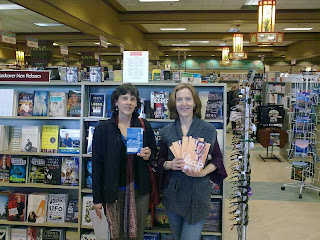 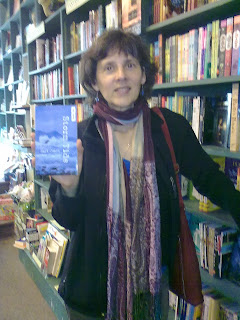 Author Jodi Lundgren and I took ourselves on a book tour today. We visited independent bookstores in Victoria that sell children’s books, and introduced ourselves as local children’s writers. I was nervous! Were we about to make fools of ourselves? First stop was Cadboro Bay Book Company, and boy am I glad we started there. We gathered our nerve and said, “We’ve come to introduce ourselves. We’re local authors, and we want to tell you about our recently published books.” The ladies smiled welcome, and we were both put at ease. The ladies asked us lots of questions about our books so that they could speak about them more knowledgeably when kids asked, and then showed us where our books were on the shelves. It was a wonderful, empowering experience. From Cadboro Bay Books we went to Ivy’s, Bolen’s, Munro’s and Tall Tales Books. We saw our books on the shelves in each store, signed copies and had those lovely “Autographed Copy” stickers put on them, and met many of the wonderful, committed and knowledgeable book sellers that take care of writers in this city. I know there are a lot of adjectives in this post—but it’s because I feel blessed when I see how many people there are out there spending their lives learning about and selling good books. The independent book stores in Victoria are so welcoming and they’re full of the best books the world has to offer. I’m so grateful to be part of that!